IS NOW THE TIME TO BUY? 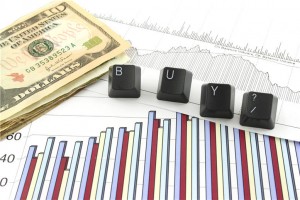 Some bulls see great opportunities in this correction.

“The lower things go, the more I buy.” The legendary Warren Buffett said those words on August 9 in a chat with Fortune. Buffett is a buy-and-hold kind of guy, and even if you don’t buy into his approach, you have to admit stocks are cheap in the wake of the recent correction. For many investors, a downturn like this means picking up quality stocks at markdown prices, including dividend-paying stocks.1

Just how cheap are stocks in August? We have some compelling valuations out there. Just to give you some idea of where the broad market is at, the 12-month forward equity earnings yield of the MSCI World Index (according to Reuters) was just above 10% on August 12. This was the highest earnings yield since January 2009 – and more than five times the yield of the 10-year Treasury in mid-August.2

Domestically, Capital IQ data from August 12 shows that stocks in the S&P 500 are trading at a forward price-to-earnings ratio of around 12. Historically, the forward P-E ratio for the S&P 500 has averaged about 16. Judging by that yardstick, we have a buyer’s market right now.3

Returning to Buffett, the “oracle of Omaha” once famously said that you should “only buy something that you’d be perfectly happy to hold if the market shut down for 10 years.” The stock market is very much a long-term proposition. The last decade or so aside, taking a long view and sticking it out has had its merits.4

When you were in college, where was the Dow trading at? Where is it now? For most people, the answer would be “notably higher”.

Have you noticed how oil prices have fallen? The ripple effect of this development also bodes well for equities. Oil settled at $85.38 a barrel on the NYMEX August 12. Compare that to the $100 oil of February. Oil price cuts imply a stronger U.S. economy – with better corporate profits, lower energy costs, and improved tax receipts.5

Could a QE3 come along? The Federal Reserve hasn’t indicated this, but don’t rule it out considering that President Obama’s popularity is scraping new lows and he would like another term in office. Another monetary stimulus from the Fed would mean more cash, which could mean more money directed into gold or equities.

Fed policy could be a big factor in the market’s direction. On August 9, the Fed issued a remarkably definite statement, pledging to keep the federal funds rate at near-zero levels through mid-2013. Wall Street’s volatility might ebb when institutional investors conclude whether or not that tactic will really improve America’s GDP. 6

Is the glass half-full or half-empty? Bears are arguing that we don’t have enough job creation in the economy (or buying pressure in the stock market) to drive stocks up. They also point out that the Dow dipped beneath its 50-day moving average and 200-day moving average during the choppy trading week of August 8-12.7

Bulls are countering these arguments by pointing to the relative strength index of the DJIA. On August 11, for example, the Dow’s RSI was at 26.6. A reading below 30 is interpreted as a signal that the market is oversold. The S&P 500’s RSI hit 16.5 on August 8, which was a 10-year low. They also think that Ben Bernanke’s approach will succeed – that is, that these sustained low interest rates will encourage businesses to borrow and expand, with gains in consumer income and consumer spending as byproducts. On top of that, many corporations are generating decent or better profits, and carrying much less debt than they did two or three years ago.7,8

Markets eventually rebound – so these prices won’t last forever. Falling share prices may translate to some outstanding long-term opportunities. Whether you simply practice dollar-cost averaging or something more hands-on, persistence and longevity can be good friends.

Last week, Chicago Tribune columnist Gail MarksJarvis noted how quickly we came back from the 2007-09 bear market. A hypothetical investor with $10,000 in assets divided evenly among long-term Treasuries and an index fund mirroring the S&P 500 would have had but $7,700 by April 2009. By October 2010, the value of that portfolio would have grown 46.8% in 18 months to around $11,300. You don’t want to miss comebacks like that – and Wall Street is certainly capable of making them.9

Kevin M. Nast is a Financial Adviser and the President of NastGroup Financial in Northville, MI 48167. He may be reached at nastgroupfinancial.com or 248.347.1888. Kevin also services clients in Brighton, Livonia, Canton, Wixom, Milford and the surrounding metro Detroit area as well as 13 additional states across the US.

The Standard and Poor’s Index of 500 Common Stocks is an unmanaged index of common stocks and is frequently used as a general measure of market performance. An investor cannot invest in the S&P 500 directly.  Past performance is no guarantee of future results.